Main page » News » Summary of the 3rd Innovation Forum, “Climate in the face of the challenges of the 21st century”, January 29th, 2021

Summary of the 3rd Innovation Forum, “Climate in the face of the challenges of the 21st century”, January 29th, 2021

The main goal of the meeting was the discussion the revision of the EU ETS and non-ETS in the context of reducing greenhouse gas emission, planned in the package “Fit for 55%”. The panel session was attended by a wide group of experts, including representatives of the Polish government, industry, academia and market experts. Among the invited guests were Mr. Adam Guibourgé-Czetwertyński, Undersecretary of State, Ministry of Climate and Environment of Poland and Mr. Jos Delbeke from the former Director General of DG Climate Action of the European Commission. The meeting was opened by Prof. Aleksander Nawrat from the Ministry of Climate and Environment, and the moderators were: Mrs. Marta Rosłaniec and Mr. Robert Jeszke (CAKE/KOBiZE). The meeting was run in English.

In the first part of the meeting, Ms Izabela Zborowska and Mr Maciej Pyrka (CAKE/KOBiZE) discussed the key elements of the EU ETS and non-ETS system revision (ESR decision) for the “Fit for 55%” package, as well as solutions and mechanisms that can be further implemented. The most important challenges planned the 2nd quater of 2021 are among others also: LULUCF revision (LULUCF regulation), revision of MSR (Market Stability Reserve), introduction of the Carbon Border Adjustment Mechanism (CBAM) or amendment of the Energy Efficiency and Renewable Energy directives. In non-ETS the key issue would be the setting of  the state emission reduction targets in the period 2021-2030 and the issue of extension of the EU ETS to non-ETS sectors, i.e. transport or buildings. Currently, the analysis are being carried, e.g. whether these sectors should be included in the new ETS or should be covered only with the national tax). In turn, in the EU ETS, increasing the EU emission reduction target to 55% in 2030 will translate into a different distribution of the reduction effort in the EU ETS and non-ETS (e.g. 65% and 41% reduction, respectively). Including the entire aviation sector, building and transport sector into the EU ETS will change these proportions even more, resulting in 60% vs. 31%. Looking at MSR revision, the parameters may change – the upper threshold (probably decrease), % intake rate and the cancellation of allowances in the reserve from 2023 may be limited. CBAM may be introduced in one of several forms, e.g. import, consumption, or carbon tax (e.g. type of excise duty or VAT) or in the way to include importers in a system similar to the EU ETS. The presentation is available below.

In the second part of the meeting, a panel discussion took place: “Revision of the EU climate legislation in the 2030 perspective“.

Mr. Jos Delbeke (European University Institute, EUI), in the context of the target of emissions reduction of 55% by 2030, underlined some key issues about the financial resources for the coming years and the Just Transition Fund (JTF), a new revolution in the field of innovation (e.g. discussion on the role of hydrogen) and that non-ETS and EU ETS sectors need to be balanced with a LULUCF – its role be taken into account in order to achieve climate neutrality (e.g. by using design offset mechanisms related to removals, but which would require a credible monitoring, reporting and verification system (MRV)). In his speech, he appreciated the role of the report on the Carbon Border Adjustment Mechanism prepared by CAKE/KOBiZE, especially due to the ongoing discussion on this subject (the CAKE analysis is available here: ANALYSIS: Effects of the Border Tax Adjustment in EU until 2030 – CAKE Centrum Analiz Klimatyczno-Energetycznych (climatecake.pl)).

Ms. Ewa Krukowska (Bloomberg) presented opinion concerning the situation on the European forum – in June, the European Commission is going to reveal a legislative package called “Fit for 55% package”, which is to include proposals for the revision of the EU ETS system, ESR regulation, including the scope of ESR in EU ETS, energy taxation, LULUCF, energy efficiency and renewable energy. Ms. Ewa Krukowska also presented BloombergNEF (BNEF) forecasts for EUA allowance prices for 2030 – from EUR 50 to over EUR 80 in extreme scenarios.

Mr. Andrei Marcu (ERCST) talked about supporting the transformation of the EU economy by introducing incentives for investors, the need to decarbonise the industry in the context of increased reduction targets, abut the CBAM tax with free allocation continuation or with full auctioning, expanding the number of sectors in the EU ETS and MSR review (with dynamic thresholds and its opposition to the cancellation of allowances from the reserve from 2023). He emphasized that the elements of European Green Deal Strategy should be implemented with correlation to each other and take place comprehensively.

Mr. Adam Guibourge-Czetwertyński, Undersecretary of State, Ministry of Climate and Environment, emphasized that the Ministry has prepared a project of energy policy transformation, which is a great challenge for Poland (“Poland’s Energy Policy until 2040” was adopted by the Council of Ministers on 02.02.2021). He emphasized that at the EU level, Poland also wants to participate in the achievement of the emission reduction targets adopted by the EU, but the energy transformation requires many changes, especially in Poland. The Minister recalled Poland presented last year a proposal to amend the EU ETS. There are many possibilities for increasing the reduction targets other than extending the scope of the EU ETS so as not to build up new social burdens. Regarding the CBAM proposal, he stressed that this element would not perceive as an achievement of reudction goals on its own and should be considered as a tool with conjunction with other policies.

Mr. Tomasz Dąbrowski (PKEE) pointed out that the inclusion of new sectors to the EU ETS may result in an increased demand for energy. He emphasized that it was necessary to create and transform the energy system so that the cost passed on to consumers and industry would not be too burdensome. There are three reform paths planned in Poland: restructuring of the mining sector, closure of coal-fired power plants and investments in new sources in order to ensure security of supply. Poland decided to invest in offshore wind energy, but also in nuclear which however will rather be available in the perspective of 2040. He also emphasized the need for energy storage and investments in gas (building networks and pipelines).

Mr. Tobiasz Adamczewski (Forum Energii) emphasized the role of solidarity mechanisms in the EU ETS, on which new sectors included in a separate EU ETS should be based. The problem may be social acceptance of higher costs in new sectors, which for households may even double (by additionally including the cost of allowances).

Mr. Adam Berman (IETA) admitted that the IAS reserve is working properly and reminded that the IAS is a mechanism that should stabilize the market in terms of demand and supply of allowances. In MSR rewiev increasing the EU reduction target to 55% and other national emission reduction policies (that affect MSR) should take into account. The MSR thresholds should be lowered and the % intake rate should be increased due to the decarbonisation of the EU economy, but the LRF level will be decisive. Due to the possible problem with the liquidity of allowances in 2030 and the implementation of the European Green Deal, perhaps a small number of allowances for industry should be placed in the reserve.

Ms Bernadett Papp (Vertis Finance), emphasized that the EU ETS is becoming a huge challenge for participants. For the industry sector, the future is currently uncertain, in particular due to the lack of EUA price signal and the number of free allowances (less EUA allocation, CBAM issue). Installations in the EU ETS must have a clear and transparent price signal in order to be able to undertake long-term investments, and the future of free allocation is now a top priority for industry.

Mr. Robert Jeszke (CAKE/KOBiZE), while continuing the discussion on the most likely scenarios of including non-ETS sectors such as transport and buildings in the EU ETS, pointed to the potential problems of such a solution, since both sectors have different specificities. He stressed that the starting point for the countries of Central and Eastern Europe is completely different, mainly due to the energy sector. For Poland, the transport sector is also very important, as well as the social aspect, so as „not to leave anyone behind”. In the context of the MSR review, inclusion all other policies (e.g. energy efficiency) and new sectors and lack of future market liquidity will be very important. With regard to the CBAM tax, it will be very difficult to convince third countries to apply such a restrictive climate policy as the EU have (indirectly by including them in CBAM). Perhaps this is also the right moment for changes to the WTO, and in this context climate aspects should take into account.

The conference was very successful – it gathered about 400 observing participants on various on-line channels. It was possible thanks to the international character of the meeting and the enormous knowledge and experience of the speakers. During the conference, many important issues related to the EU ETS and non-ETS systems, as well as new legal regulations, in the context of increasing the emission reduction target by 2030 and climate neutrality, were raised. Therefore it allowed for broadening the knowledge and awareness of the Polish situation in the field of adaptation to climate goals and identification of future challenges in the context of the proposed legislation under the European Climate Law, which is an important element of the implementation of the European Green Deal strategy.

The event’s broadcast is available at: facebook.com oraz PAP 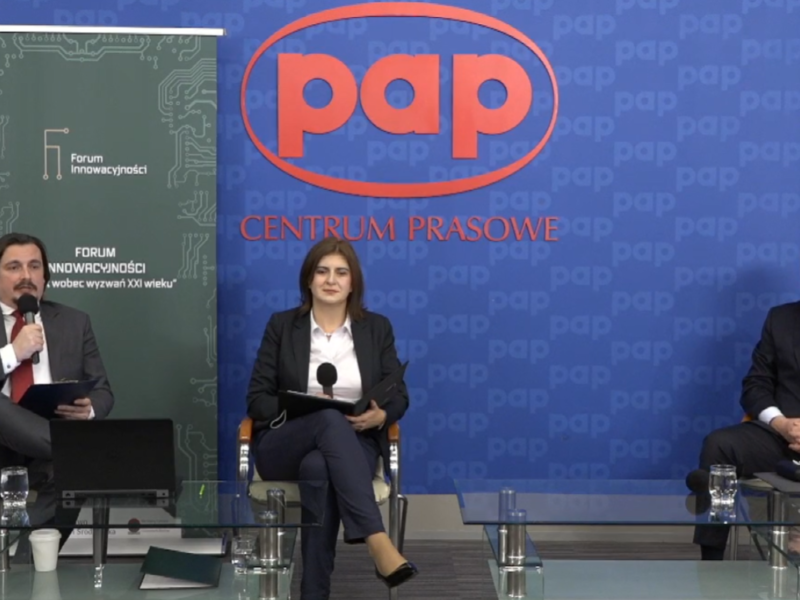 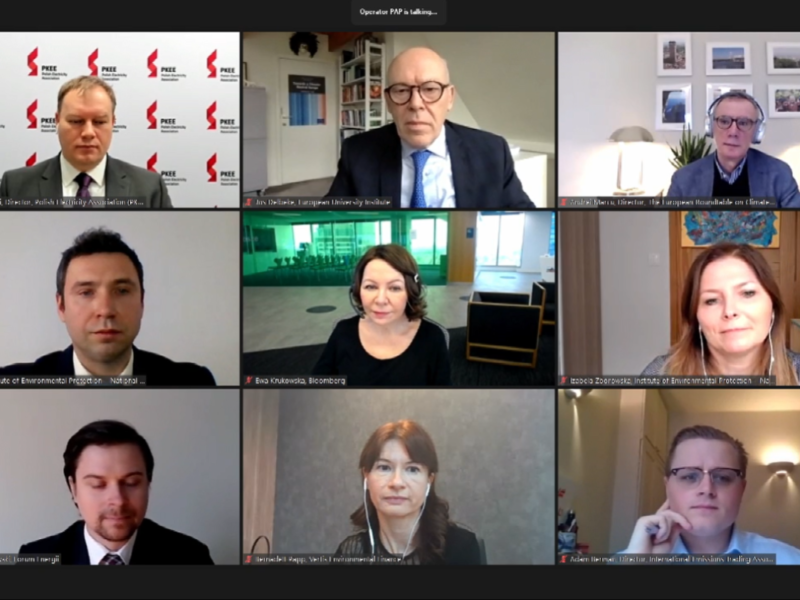