The publications consist of two documents – full analyzes in English and summaries in Polish.

ENERGY: SCENARIOS OF LOW-EMISSION ENERGY SECTOR FOR POLAND AND THE EU UNTIL 2050 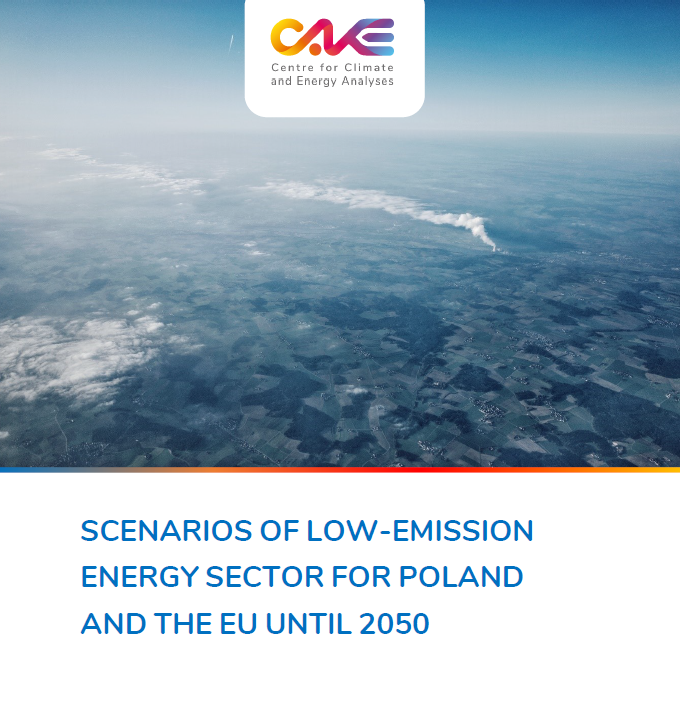 The analysis of energy sector development scenarios was prepared on the basis of the linear optimization model built under LIFE Climate CAKE PL called MEESA, which allows for finding the best way to fullfill the demand for electricity and district heat in EU28 with given emission limits, and other objectives set through the EU’s climate and energy policy.

On the basis of established assumptions  of maintaining a policy focused on systematic reduction of CO2 emissions and an increase in the share of renewable energy sources (up to a minimum of 50% of electricity demand in each of the analyzed countries by 2050), an analysis of four scenarios of the low-emission EU electricity and district heating sector was conducted:

In each of the considered scenarios for Poland, the role of lignite is significantly reduced in the perspective 2025 – 2030. It results from the increse proces of CO2, the availability of imported energy and the depletion of currently exploited coal deposits (launching new pit mines would require significant financial outlays).Dynamic development of wind farms, increase of photovoltaic sources of energy increase, but the development of biomass energy sources is reduced.

The total reduction of CO2 emissions in the energy sector in Poland in 2015-2050 reaches a level of approx. 35% for the scenario without forced reductions (REF scenario), close to 80% in the scenario of forced reductions (BAU scenario), and approx. 95% in scenarios with deep emission reduction ( DEEP and DEEPNN scenarios). For the EU, on the other hand, the range of differences achieved between the scenarios is definitely lower and is between 60% to 95%. This results form the significant reduction in the EU achieved due to the continuation of the current climate and energy policy.

The results of the analysis show that already in the reference scenario across the EU there is a very significant decrease in CO2 emissions (by nearly 50%) by 2030, while later the rate of further reduction in this scenario clearly decreases. The decrease in the rate of emission reduction after 2030 in the REF scenario also suggests that the greatest emission reduction potential is used through forced withdrawal of coal and further reductions are mainly the results from rising prices of emission allowances and assumptions regarding the required share of renewable energy in the energy mix.

In all forced reduction scenarios, Poland’s electricity imports exceed its exports. In the DEEP scenario, investment outlays are almost 35% higher than in the reference scenario. The increase in expenditure in the DEEPNN scenario is slightly lower (approx. 17% higher than in the REF scenario), as this scenario does not provide for investment in capital-intensive nuclear sources. In all scenarios for Poland, brown coal use is rapidly decreasing in 2025-2030 and wind farms are dynamically developing in all scenarios. In forced deep emission reduction scenarios, nuclear units play a very important role.

One of the main conclusions is also the increase in average production costs in Poland occurs in all scenarios. An increase of over 40% compared to the base year level is already present in the REF scenario. In the forced reduction scenarios, the increase in average production cost compared to the cost from the base year is even higher and amounts to approx. 60% in BAU, 75% in DEEP and approx. 100% in DEEPNN.

In forced deep emission reduction scenarios, nuclear units play a very important role in reducing the cost of reducing emissions in the EU. If it is not possible to build nuclear power plants (DEEPNN scenario) in Poland, there is a further increase in the use of renewable energy sources, including offshore wind farms and biogas as well as gas and steam blocks equipped with CCS. Dependence on imported electricity is also increasing.

To sum up the costs – Deep reduction scenarios lead to very high costs of CO2 reduction. The use of coal in the energy sector becomes unprofitable already in the BAU scenario and in the DEEP and DEEPNN scenarios, at the end of the analyzed period, even gas sources cease to be an economically justified option (apart from their regulatory and reserve role).

Countries with high nuclear power generation and / or significant renewable energy potential will be energy exporters, while countries that give up nuclear energy or have insufficient renewable resources will import a significant portion of the energy they need.

TRANSPORT: CO2 EMISSIONS REDUCTION POTENTIAL  IN TRANSPORT SECTOR IN POLAND AND THE EU UNTIL 2050 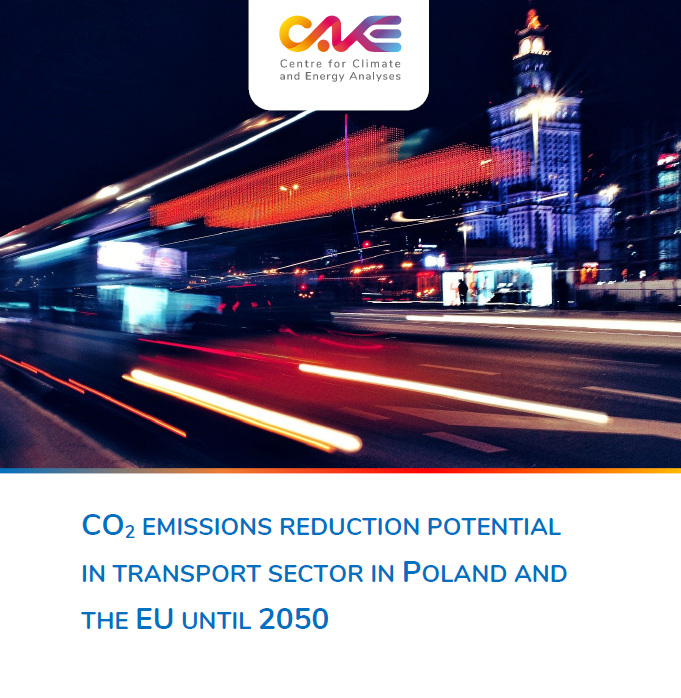 In analysis four different analytical scenarios were prepared to assess possible impact of new technologies development in the transport sector on total sector activity (passenger and freight transport activity), CO2 emissions and energy needs,  with fleet structure. Among these scenarios should be mentioned: Technology Progress Scenario (variant Low, Moderate and High) and Forced electromobility scenario. It is important to underline that our analysis focused on private cars and Light duty vehicles (LDVs) as the main sources of emissions in transport sector.

Results for Poland shows substantial potential in CO2 emissions reduction for cars and LDVs. In the technology progress scenarios, the share of electric vehicles (LDV and cars) is in the range of about 40% to about 55%, while in the Forced electromobility scenario in 2050 the share of electric delivery vehicles is almost 100%.

LDVs activity in comparison to cars is growing faster in the baseline scenario what is visible in CO2 emissions levels, assuming the same share of electric technology penetration. This is due to the relative costs – cheaper electric vehicles will lure customers to that kind of transport from other modes, like LDVs in case of freight transport.

In the baseline CO2 emissions in LDVs will be 35% higher than in 2050 comparing to 2015. In case of cars the baseline scenario assumes that emissions fall around 44% compared to 2050 in comaprison to 2015 what results from the improvment of the emission of new vehicles and the development of low-carbon technologies.

Another important issue that resulted from our research and analysis is the review of the costs associated with the development of electromobility. In all scenarios, a significant losses of state budget revenues are projected, which increases mostly at the end of the analyzed period (from almost EUR 9 billion in the Low scenario to EUR 66 billion in the Forced electromobility scenario). The loss of state budget revenues is caused by a decrease in tax receipts, which constitute the major part of the price of liquid fuels (almost 60% in the case of diesel and gasoline).

Analysis of transport costs for the user is basically the most important item that affects the overall balance of costs and benefits of electromobility. In the case of Techology Progress scenarios in which the price of electric vehicles falls, the user gets all the benefits.

Summary results for Poland show that depending on the analyzed scenario, the change in financial balance in the transport sector may range from 18.1 billion euro profit in the Low scenario up to over 167 billion euro loss in Forced electromobility scenario. Assumptions about vehicle prices play a key role in shaping mobility costs.

CO2 emissions reduction potential in transport sector in Poland and the EU until 2050 (3.4 MiB, 798 hits)