Main page » News » EURACTIV Virtual Conference: “Meeting the new 2030 emissions targets: how do we get there?”

EURACTIV Virtual Conference: “Meeting the new 2030 emissions targets: how do we get there?”

On November 17, 2020, a representative of LIFE Climate CAKE PL from KOBiZE / IOŚ-PIB was introduced to the international conference organized by EURACTIV and PKEE entitled: “Meeting the new emission targets by 2030: how do we get there?”

The main point of the meeting was the discussion on the possibility of achieving the 2030 Climate Target Plan proposed by the European Commission. The debate led by Frederic Simon was attended by: Michał Kurtyka – Minister of Climate and Environment, Clara de la Torre – Deputy Director General of DG CLIMA (European Commission), Morten Petersen – Vice-President of the ITRE Committee of the European Parliament, Paweł Cioch – Vice-President of the PGE Management Board and Member of the Council Managing PKEE and Robert Jeszke – Head of the KOBIZE / IOŚ-PIB Strategy, Analysis and Auction Team, Coordinator of the LIFE Climate CAKE PL project.

At the beginning, the participants had the opportunity to listen to a speech by Mr. Michał Kurtyka, Minister of Environment and Climate, who emphasized that in the light of the ongoing COVID-19 pandemic and its economic consequences, the new target for 2030 proposed by the European Commission and its consequences for Member States require in-depth analysis. . He emphasized that we still do not have sufficient knowledge about the effects of increasing the reduction targets for individual Member States and that such an assessment should take into account the overall impact of the proposal on the society. The Minister emphasized that the changes should not be introduced too radically. At the same time, he declared that Poland wants to be part of this change, and is already taking steps in this regard. However, it expects that the structure of the national energy system and the protection of citizens and the economy will be included in these activities.

Mr. Morten Petersen (ITRE / EP) stressed the importance of raising the level of climate ambition and involving all Member States in efforts to reduce emissions. He also stressed that the EU has at some point become a leader in terms of climate action, especially in the context of the US withdrawal from the Paris Agreement. He stated that it was impossible to achieve climate neutrality without ambitious goals along the way. He also mentioned that we need funds to achieve this goal, which was also called for by the European Parliament by proposing to increase the Just Transition Fund.

Ms Clara de la Torre (DG CLIMA) pointed out that despite the pandemic crisis, the EU is not changing direction and the climate goals remain ambitious. She added that in the technological context, the reduction target for 2030 – although not easy – is achievable. She admitted that while the transformation of the energy sector is key, construction and transport are equally important in these efforts. She pointed to tools such as investments, a price impulse, and an increase in the scope of the EU ETS. She added that the financing possibilities and the effects of including new sectors (mainly transport) in the EU ETS are constantly being analyzed. She expressed satisfaction that other countries are following the EU in terms of climate action, referring to China’s plans to become climate neutral by 2060.

Mr. Robert Jeszke (CAKE / KOBiZE) drew attention to the fact that the entire economy and all its sectors will be involved in achieving the emission reduction target, both those covered by the EU ETS and non-ETS. He added that the ongoing COVID-19 pandemic makes this challenge even more difficult. He underlined the fact that due to the different workloads and starting points of individual EU Member States, increasing ambition by 2030 will be a greater challenge for the implementation of industrial innovation and the transformation of the energy sector in low-income per capita Member States, with a higher share of fossil fuels in energy mix and higher energy consumption. Mr Robert Jeszke pointed to the need to ensure better burden-sharing in the EU in order to aid investment in regions and sectors located in less prosperous Member States with lower capital levels, thereby increasing their ability to transform. He stressed that it is necessary to ensure adequate financing, which should be properly included also in the EU ETS itself, pointing to the recently presented by Poland proposal to increase the Modernization Fund or to create the Energy Solidarity Fund. He noted that in Poland special attention should be paid to the modernization of the energy sector, including activities in the field of heating. In this context, he underlined the importance of the gas sector and the use of new technologies in transformation. He also pointed out that the CAKE / KOBiZE analyzes show that the considered inclusion of transport to the EU ETS will not automatically result in a significant reduction of emissions in the perspective of 2030, and the focus should be on cost reduction and greater penetration of electrification and hydrogen technologies in transport. Otherwise, there will only be a shift in costs to other sectors and no significant reductions will be seen in transport itself. He also drew attention to the different dynamics of historical emissions in the transport sector in individual EU countries, which will be of great importance when reducing emissions and will undoubtedly affect their pace. In conclusion, he stressed that effective support for transformation in the EU requires a coherent system that takes into account the different structures of the economies of the Member States and ensures a fair distribution of reduction efforts.

Mr. Paweł Cioch (PKEE) also stressed that increasing the target of reducing greenhouse gas emissions in 2030 to at least 55% will be a huge challenge for the entire EU. He added that the ambitious climate policy would change the business landscape in the coming years, including, in particular, the way the largest energy companies operate. At the same time, he emphasized that it is in this sector that the reduction potential in the short term is the greatest. As a consequence, a significant part of the support in the next decade should be directed to the energy transformation. He also added that the current financing is definitely insufficient, and the determinant of creating new financial instruments should be the principle of just transition. He indicated that it would be of great importance to define a clear plan to revise the EU ETS. He expressed hope that the changes to the EU ETS will include an increase in the number of emission allowances allocated to the Modernization Fund and the “solidarity pool”.

Invitations and active participation of CAKE / KOBiZE experts in conferences and international meetings with representatives of the highest institutions, both national and international, show that the results of analytical work conducted by CAKE are noticed and appreciated in Europe, while fulfilling the specific need of knowledge about the effects of climate policy at the level of individual Member States.

https://www.euractiv.com/section/energy-environment/video/meeting-the-new-2030-emissions-targets-how-do-we-get-there/ (webpage of the event) 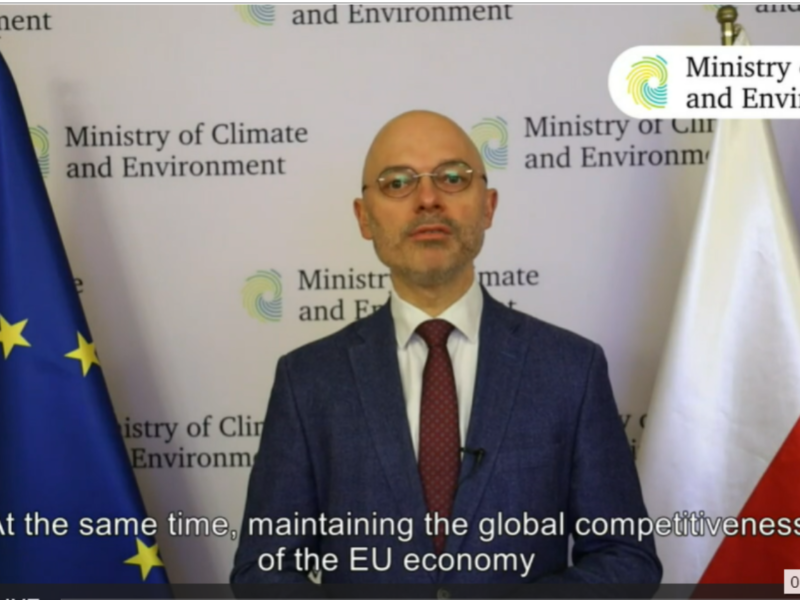 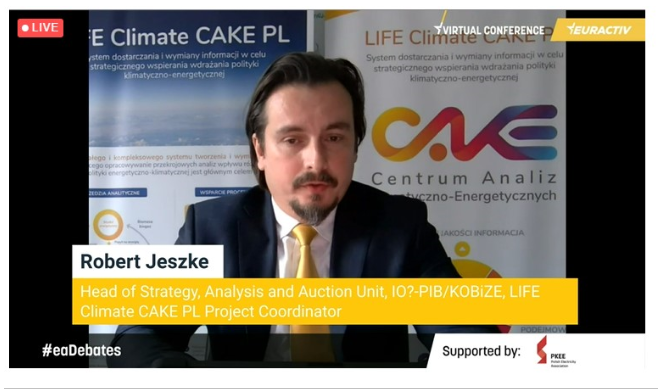 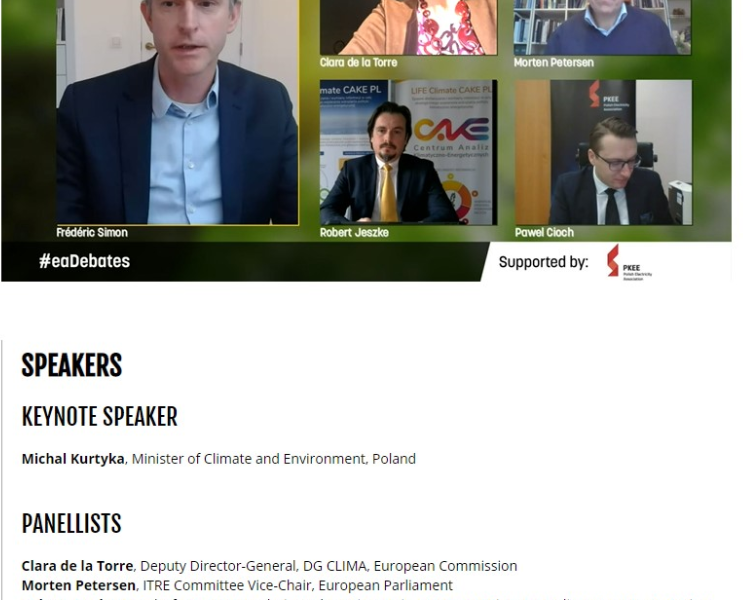