The IOŚ-PIB/KOBiZE/ CAKE  had the opportunity to actively participate in the global climate event of the COP 25 Conference, the 25th session of the Conference of the Parties to the United Nations Convention on Climate Change, which took place in Madrid this year. The LIFE Climate CAKE PL team was a co-organizer of two events called side events organized in the European Union Pavilion on December 3, 2019 and in the Paris Committee for Capacity Building (PCCB Hub) on December 6, 2019. We invite you to read the report.

On December 3, 2020, a conference on fair transformation needed to achieve net zero emissions by 2050 titled: „ Challenges and Opportunities of achieving “net zero emissions“. How to manage the just and efficient transition?” was held at the COP25 EU pavilion. The conference was co-organized by CAKE / KOBiZE, Grantham Research Institute at the London School of Economics and CAN Europe. 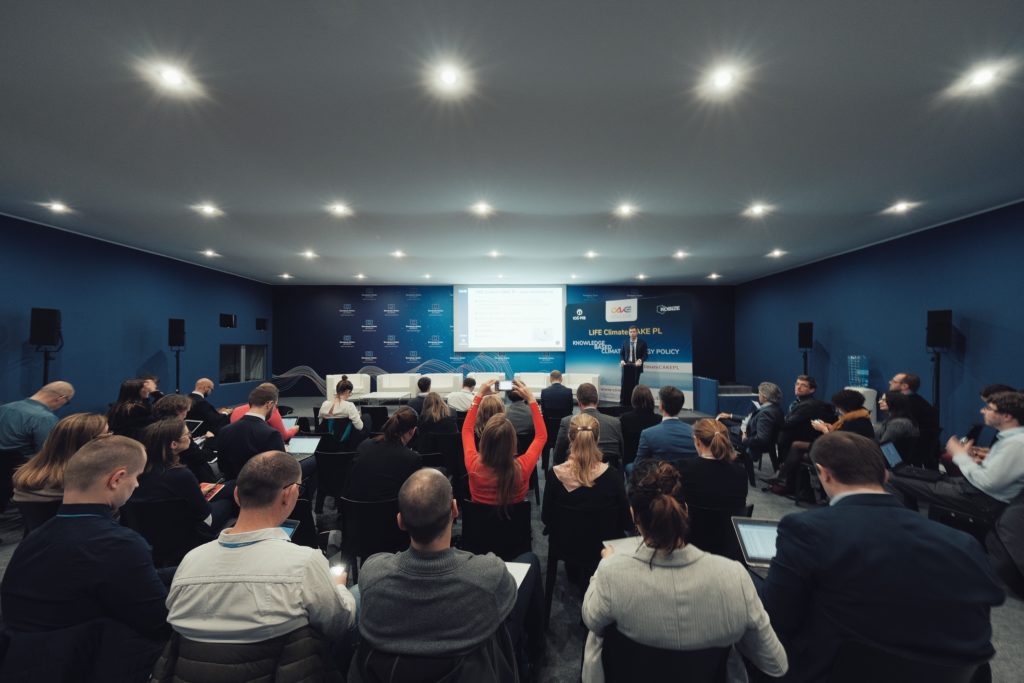 The event was attended by many experts in the field of energy and climate policy, economic modeling, as well as in mitigation activities. During the event it was discussed what structural changes in the economy will beneeded to achieve significantgreenhouse gas emission reductions. The challenges and threats that may arise as a consequence of decarbonisation and the necessary transformation of the economy d were also indicated.

In the first part of the meeting LIFE Climate CAKE PL experts presented the results of analyzes made on the d-PLACE model, showing the impact that climate  protection measures have on changes in competitiveness of sectors, emissions and on the labor market. Possible threats related to the carbon leakage phenomena were pointed  out.

LIFE Climate CAKE PL experts also discussed the most important risks associated with the low-carbon transformation from the point of view of the labor market. A problem related to mining regions in Poland weredescribed, also statistical data were presented on the number of miners, their education and age structures. Information and explanation on the effects of the low-carbon transformation that may be associated with a financial loss for those currently employed in mining was also provided.

In the second part of the event there was a panel discussion giving a floor to the leading researchers and stakeholders in the field. 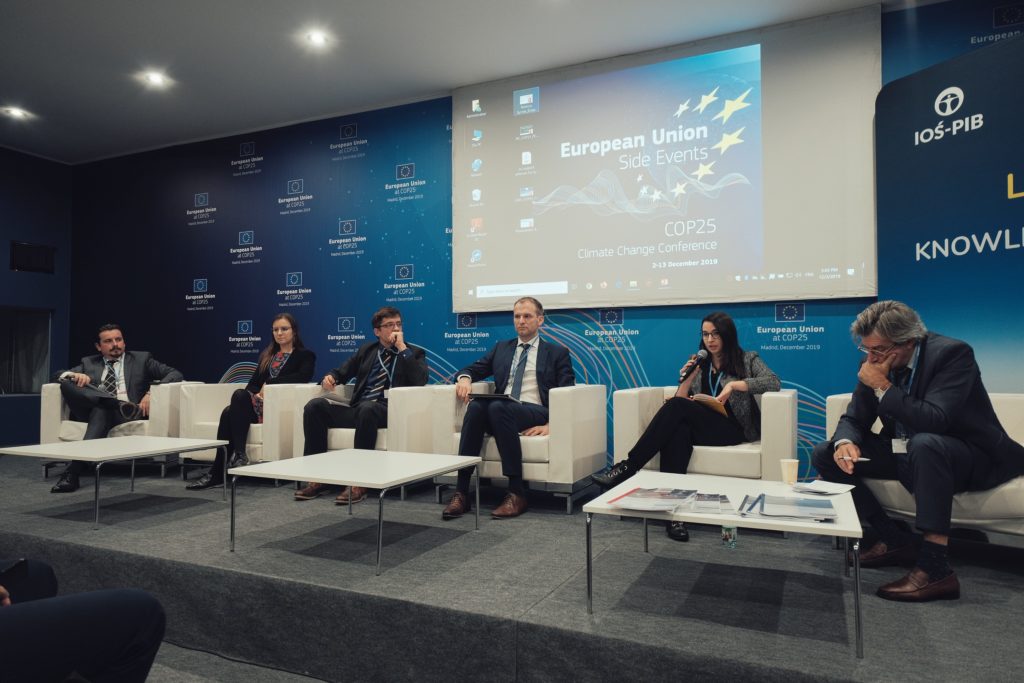 Among the panelist were:

Lech Sekyra, President of the Board, PGE Ekoserwis Sp. z.o.o

Robert Jeszke described costs of transition in carbon-intensive economies, including the risk of carbon leakage, i.e. outflow of carbon-intensive industry to regions of the world with less stringent climate policy. He also noticed an important different between attitudes towards the transition in Western Europe and new members of EU. Poland and other countries in the region were catching-up their western neighbours since 1990 and today the society might be tired and less willing to undertake another transition then countries in West.

Rebecca Byrnes noted potential challenges for workers in carbon-intensive industries and pointed at new opportunities for those workers in other sectors. She also noted that the challenges could differ between areas and highlighted the role of collaboration between different levels of government.

Andrzej Błachowicz noticed a crucial role of collaboration between researchers and other stakeholders. Although some stakeholders still seem to ignore the problem, those who are on the ground understand the need to prepare alternative scenarios of growth for regions that currently depend on coal.

Lech Sekyra discussed technologies which could be applied to reutilize ashes from combustion of fossil fuels. This technique allows to reduce usage of natural raw miners and hence has a positive effect on environment. He underlined that it can be seen as an example of application of circular economy.

Joanna Flisowska noted that the retirement age for workers is rather low: after 55 years. She also pointed out at the substantial drop in number of miners in last decade, which was primarily driven by low profitability of the sector. Moreover, the costs of extracting coal are increasing since access to those resources becomes more difficult. She also highlighted social costs of mining: damage of houses and air pollution.

Estathios Peteves reminded that the coal transition affects not only mining regions but also regions with carbon-intensive industries. He also stressed that the low-carbon transition must go hand-in-hand with industrial transition and new social contract for workers. Finally, he observed that miners possess skills such as sense of engineering, sense of risk, knowledge of tools, that could be fitting into other sectors, such as construction sector. 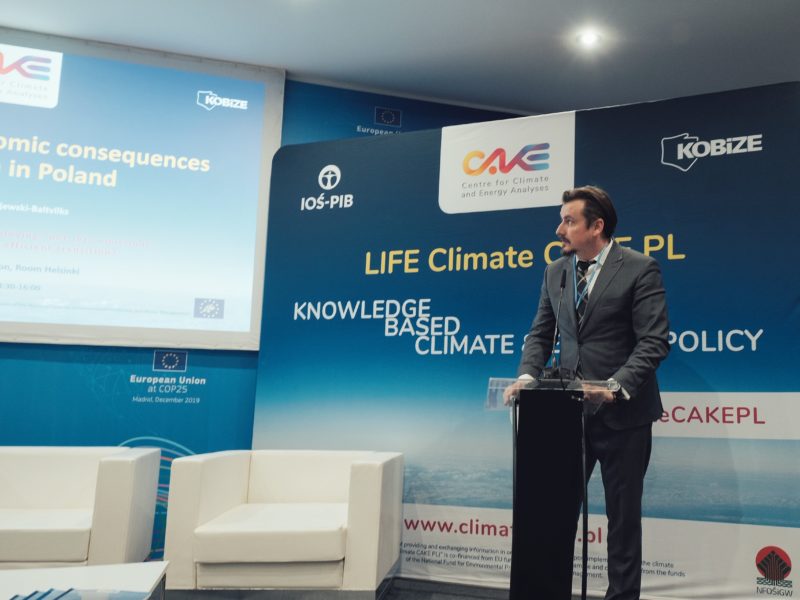 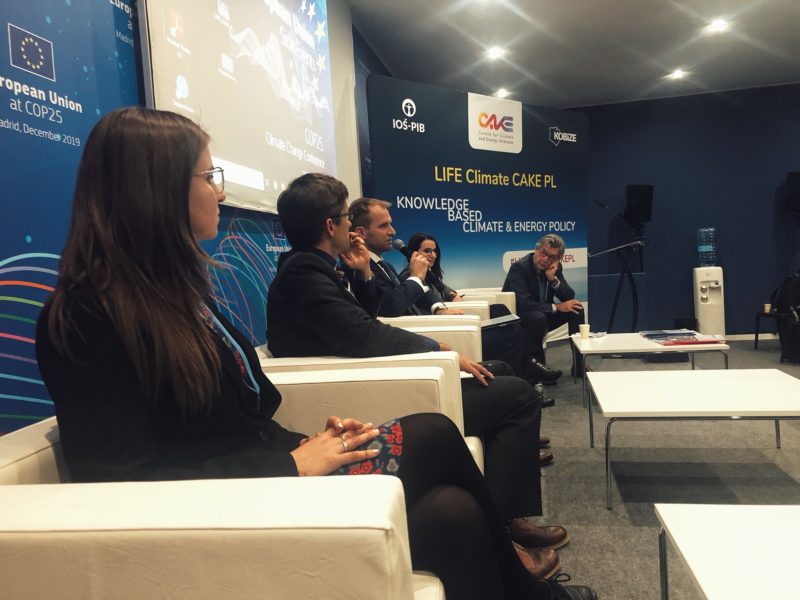 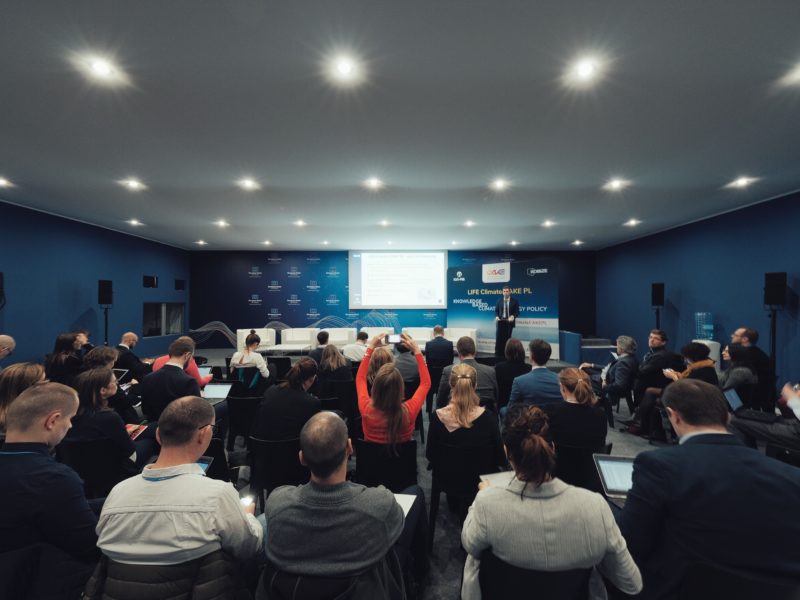 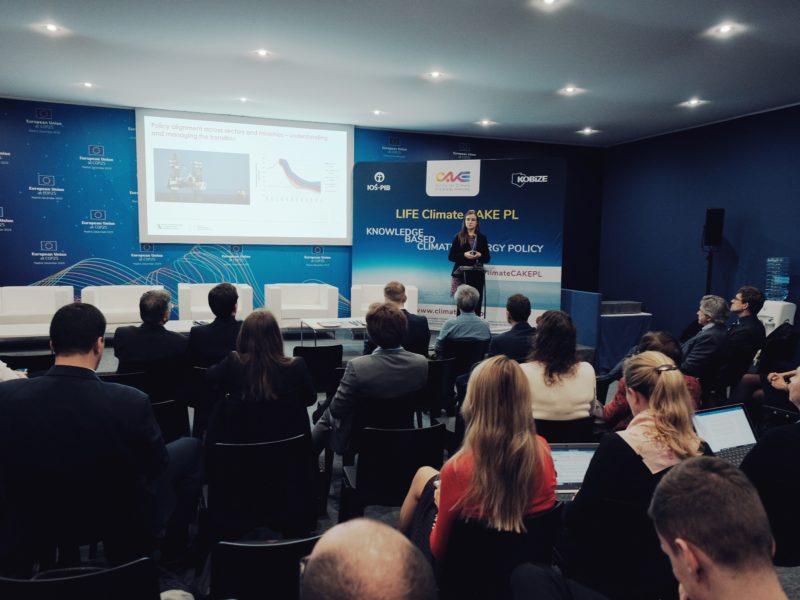 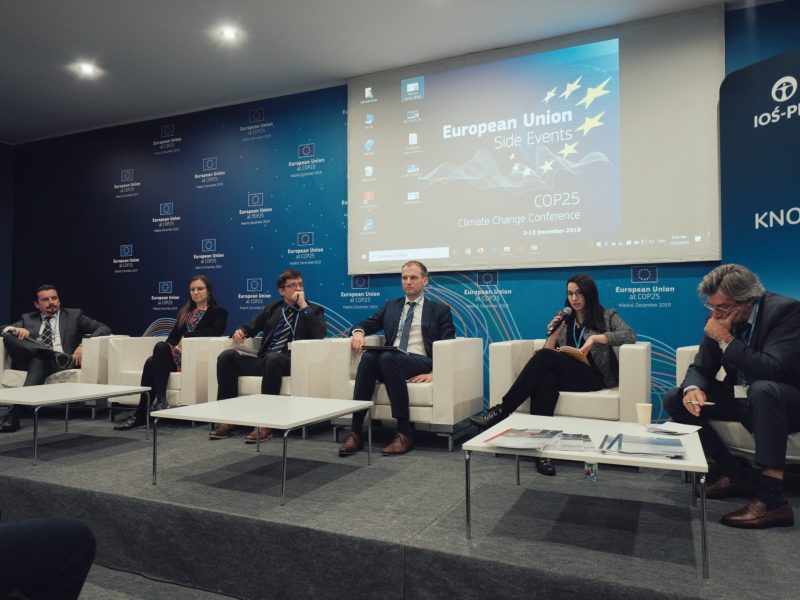 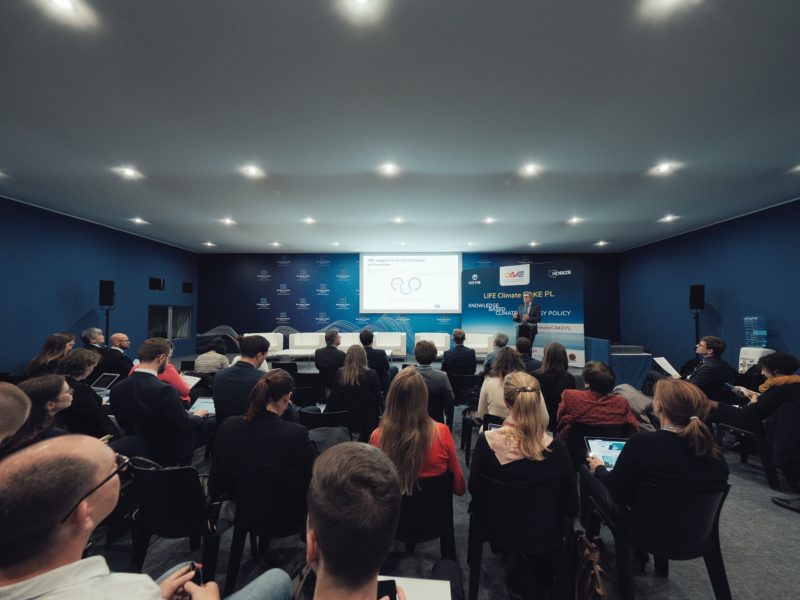 The Paris Committee on Capacity-building (PCCB), created in 2015 and acknowledged by the UNFCCC, hosted the 2nd Capacity-building Hub at the COP25 in Madrid, providing the space for meetings to share the knowledge, experience and discuss questions concerning building the capacity for more efficient climate change mitigation and adaptation. December 6 was a Knowledge to Action Day, designed to bridge capacity-building gaps in the production and translation of relevant knowledge into climate action and strengthen the engagement of universities and research institutions in building capacity for climate policy development and implementation. The session Knowledge to Action: Lessons learned from practice was organized by the Centre for Climate and Energy Analysis (CAKE/KOBiZE) together with partners from World Meteorological Organization (WMO) and Integrated Research and Action for Development (IRADe). 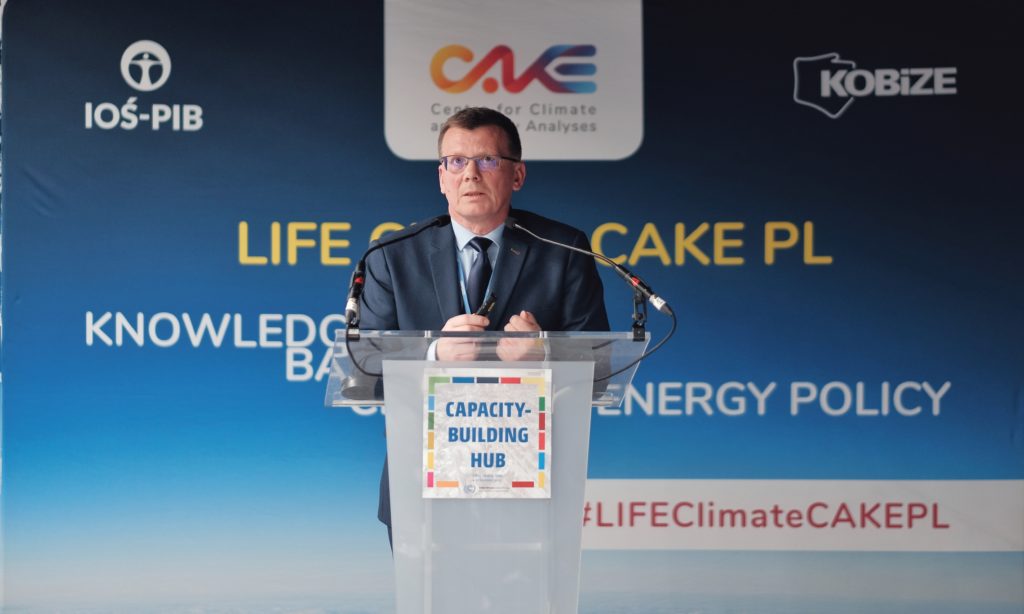 Maciej Cygler, the project team expert, introduced the project concept and emphasized the problem of adequate knowledge gaps as well as its insufficient transfer to the decision-making level. Although experts create highly advanced models and other analytical tools, they not necessarily meet the needs of stakeholders’ involved in the climate policy development and implementation. Moreover, their practical application in the decision-making is hindered by insufficient knowledge of their operation and – most importantly – effective communication of modelling results to decision makers. The presentation explained how the LIFE Climate CAKE PL project responds to the above challenges by creating a comprehensive and system solution, that includes stakeholders into the knowledge generation process. The importance of translating advanced knowledge into useful information was also emphasized.

Later in the session, Jyoti Kirit Parikh, Director of Integrated Research and Development (IRADe) and Probal Pratap Ghosh, Chief Modeler at IRADe shared their experiences. Participants had the opportunity to learn about the effects of projects implemented by IRADe concerning both inspiring and the support to activities in cities of India (Mobilizing Mitigation / Adaptation Action at Sub National Level), also use of knowledge in creating the path to achieve the goals set in NDC.

Agnes Kijazi, Director of the Tanzanian Meteorological Agency and Vice President of WMO explained how intensively the demand for knowledge is growing, especially that which is necessary to support the decision-making process in the institutional, infrastructural and procedural context as well as in relation to human resources. She presented examples of activities implemented in Tanzania. The presentation series ended with Carlos Fuller, Coordinator at Caribbean Climate Change Community (CCCC). He presented examples of various activities at national and local level, including adaptation efforts undertaken in the countries of the Caribbean region.

In the second part of the meeting participants could attend the discussion panel where Robert Jeszke, Head of the Strategy, Analysis and Auction Unite at KOBiZE, LIFE Climate CAKE PL Project Coordinator and Kirit Shantilal Parikh, President of IRADe joined the above-mentioned speakers. 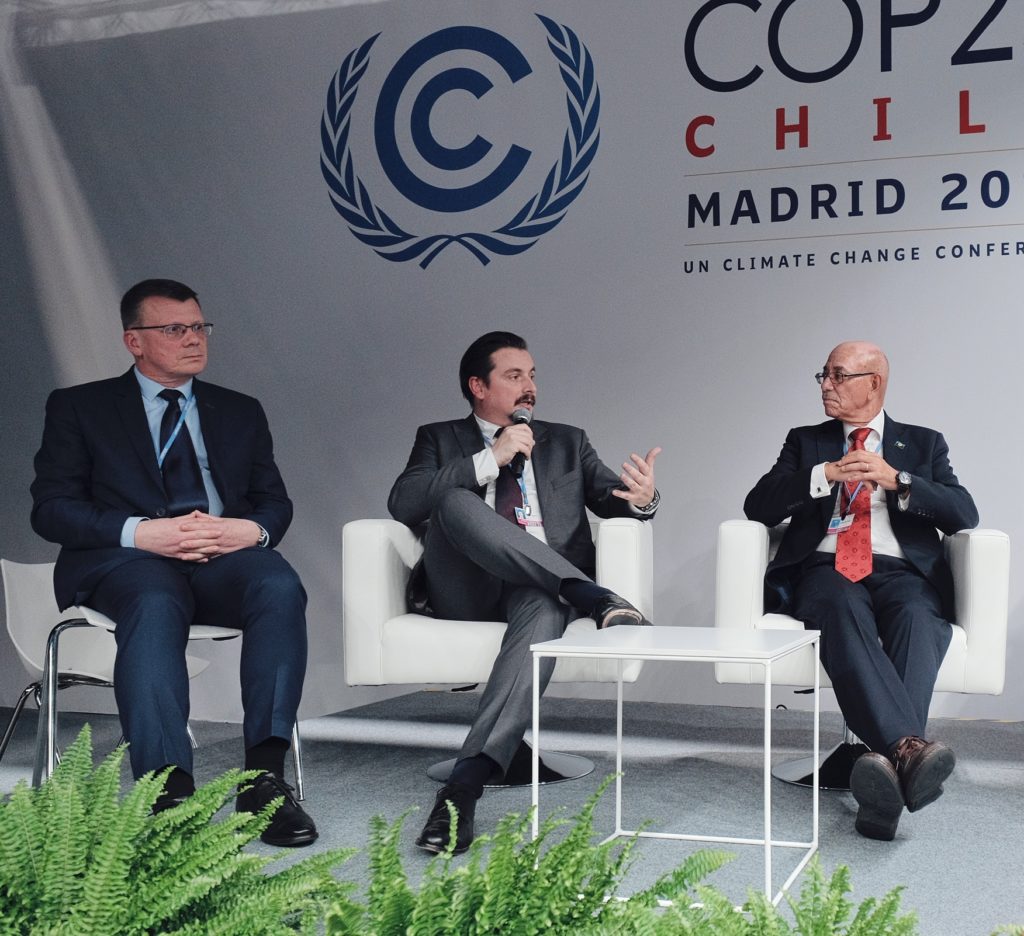 The panel discussion extended the content presented before. Panellists agreed that although the science world provides a lot of diverse and advanced knowledge, decision-makers and societies still emphasize its shortages and often an inadequacy in the context of the decision-making needs. Another important challenge is the communication gap, which appears as an insufficient translation of knowledge into information useful for decision-making, including both the policy design and measures. Panellists underlined also the threat associated with the availability of unreliable or even false knowledge.

Robert Jeszke noticed that in today’s world we sometimes experience even an overload of information, however its significant part is of low quality and is not built on reliable scientific evidence. As a result, knowledge recipients are confused, they can use the wrong information and, as a consequence, make wrong decisions. LIFE Climate CAKE PL responds to this challenge.

The session was concluded by Gaston Meskenes, The New Humanism Project. He emphasized the importance of the entire series of meetings in the PCCB Capacity-building Hub, facilitating the exchange of experiences and discussions involving a wide spectrum of actors. Many participants agreed that such debates and exchange of experience are form of research themselves. One of the most important conclusions stated that the world of science, experts and analysts should realize that the knowledge generated should be more policy relevant and respond to the needs.